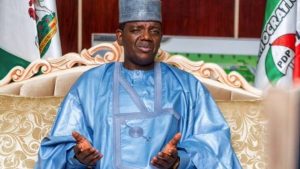 The Zamfara State Government led by Governor Bello Matawalle has set aside a total of N200 million for its amnesty programme for ‘repentant’ bandits in 2021.

According to SaharaReporters, this was contained in the 2021 budget details passed by the Zamfara State House of Assembly in December 2020.

It was gathered that government also earmarked N354 million for projects related to grazing reserves.

Zamfara, like other North-West states, has in the last 10 years faced devastating attacks from armed bandits.

Meanwhile, Governor Matawalle has called on his Niger state counterpart, Abubakar Bello to negotiate with bandits.

He made the call while speaking to State House correspondents after a meeting with President Muhammadu Buhari at the Presidential Villa on Wednesday.

Recall that governor Bello had said that his government will not negotiate with bandits, but will ensure the return of students and staff of Government Secondary School in Kagara.

Matawalle asked his colleague to dialogue with the bandits to ensure the release of the students, staff, and family members of the school.

The governor noted that negotiation was not a sign of weakness but part of peace efforts. He added that not all bandits were criminals.

Speaking futher, Matawalle asserted that he inherited banditry from the previous administration, noting that Zamfara is enjoying peace right now due to the amnesty granted bandits.

According to the governor, discussion were still ongoing with Bello concerning his state, adding that there shall be an end to the clashes soon.