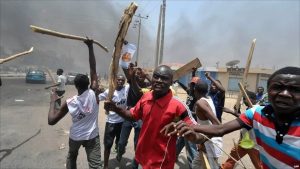 Angry protests have erupted in Jangebe community in the Talata Mafara Local Government Area of Zamfara State over the abduction of students at the Government Girls Secondary School.

It was learned that some youths blocked access roads to the community, burning tires and preventing officials from gaining access.

The youths were also said to be resisting security operatives, government personnel, and journalists trying to access the school.

“Angry residents are protesting. They have blocked access road to the community, burning tyres and resisting journalists,” a resident said.

Naija News had earlier reported that gunmen suspected to be bandits stormed the school in the early hours of Friday and abducted an unconfirmed number of schoolgirls.

The sad incident was confirmed by the Commissioner of Security and Home Affairs, Alhaji Abubakar Dauran while addressing newsmen hours after the kidnap.

Meanwhile, prominent Islamic scholar, Sheikh Ahmad Gumi has revealed that another faction of bandits in Zamfara State is responsible for the abduction of the students.

In an interview with The Nation, Gumi said the bandits he recently met with inside Zamfara forests were not responsible for the kidnap of the schoolgirls.

The prominent cleric had earlier met with the bandits in Zamfara where about 500 were reported to have repented in Shinkafi local government area.

Sheik Gumi and his delegation also met with bandits at Sububu forest and Pakai forests to accept the amnesty granted to them by the state government.

He said: “They are not the ones that abducted the girls. It is a splinter group.”

When asked whether he would be going to Zamfara to meet the bandits for talks and plea for the release of the schoolgirls, Sheikh Gumi simply said, “maybe”.